Yellowtail Monkey Off My Back 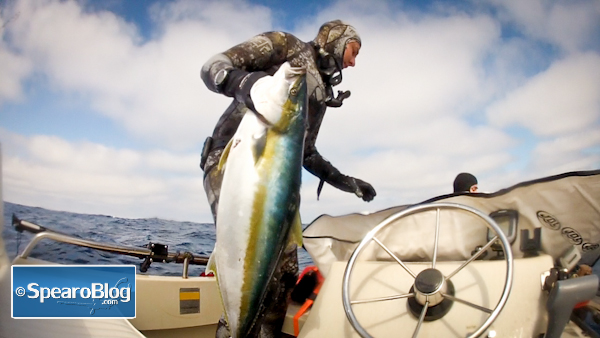 Last Saturday I finally shot and landed my first Yellowtail of the season. It feels great to finally get that monkey off my back. I learned a gear setup lesson the hard way and refreshed my technique. Enjoy these photos then read on to learn from my mistakes.

I learned the hard way about how to setup a new slip-tip. Three failed slip-tip deployments could have been avoided. The two outings from last week I had some pretty solid shots on some Yellowtail. I shot, watched the shaft go in, experienced pure joy, felt the weight of the fish for a split second then in slow motion – the shaft fell out of the struggling fish. Slip tip not deploying until completely out of the fish. I float there with confusion, frustration, and disappointment. It happened once on the only fish I saw three trips ago.  On the next trip it happened two more times. Good shots and no slip tip deployment. Once, maybe twice I’d believe it was a fluke but not 3 time in a row. Back on the boat after the last failure Alan, a fellow San Diego Freediver and Team SDF team mate, noticed and pointed out what was wrong. My slip-tip slide ring was missing a piece of electrical tape around the shaft to keep it from sliding all the way back after a shot. Since the slide ring was free to slide all the way it kept enough tension on the slip-tip to keep it from deploying. I had no idea.

The lesson I relearned was to be patient, calm, and wait for the yellowtail. First diver on a paddy usually gets the best shot. Calmly swim towards the paddy and if the fish are there they will make a few passes to check you out. As long as you stay calm and dont give them the death predator stare they’ll come in close enough to give you a good shot. I got greedy and shot the first one that came in range. It was going crazy as I pulled it in. Out of nowhere, another Yellowtail, about twice its size came in to see what the commotion was about. I should have waited but at least I got that Yellowtail skunk off me. In the end it worked out. Matt jumped in after me and after much cat and mouse he shot the big one and got it on the boat.

Is it Worth It?

After all the missed shots, disappointment, sun burns, early morning starts, wind and weather, boat ride beatings, and equipment malfunctions, is it worth it? Hell yes. If it was easy, everyone would do this.