Spearfishing White Seabass in the Kelp 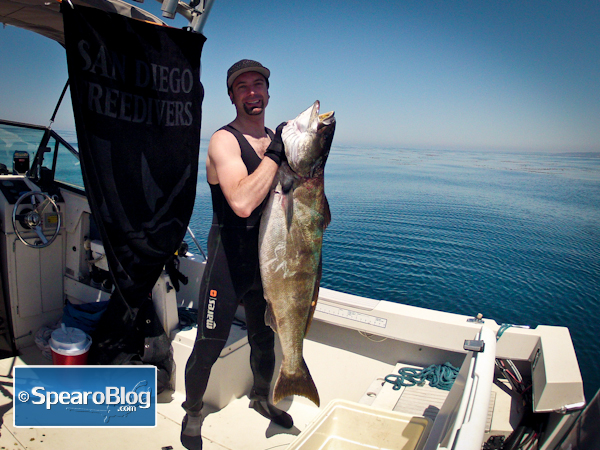 Last month I went out spearfishing with my fellow San Diego Freediver Ryan. We were on the hunt for White Seabass and here’s a quick report.

We started early – It was cold but we had high hopes. We launched Ryan’s boat and were on our way to one of the local kelp forests. Putting in work – We hit a one spot and didn’t see any white seabass after diving for a few hours. We pulled anchor and moved to another spot. There was a lot more life in this area. The sun was up by now and the visibility was great. I saw a nice size Calico Bass and an even bigger Sheepshead. I thought about shooting the Sheepshead but I’d probably see the White Seabass right after.

White Seabass – On my next dive I see one. It was swimming past. It looks far and I doubt I can make a good shot. I think about shooting but by then it’s too late. It has made more distance and turned. Some might say take the shot but there is no point in wounding a fish if it doesn’t look like you can land it. When I came up to the surface Ryan yells “Fish on!” he placed a solid shot on a 40 pounder and it ripped all the line off his reel. We spent the next 30 minutes cutting it out of the kelp. We dove around a bit more but I was way tired by now. I was starting to cramp up and decided to call it a day. Ryan posed for some photos and we were on our way home.

Congrats Ryan! – Thanks for taking me out! That was a fun day. Check out Ryan’s company Precision Dive Products maker of the Spearo Backpack where you can carry all your spearfishing gear in one bag.