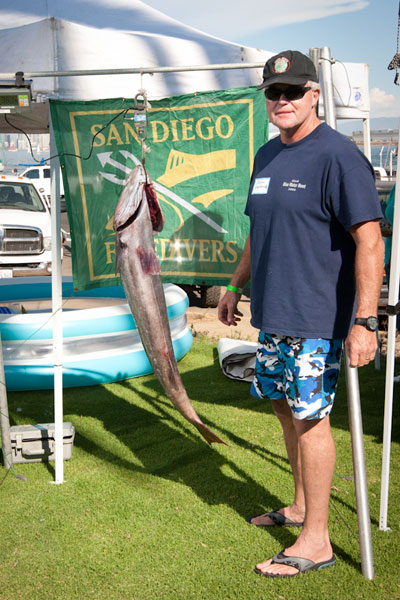 Replace rubber, worn/frayed spectra and leader line, double crimp, etc. This has as much to do with safety as it does with not losing gear or fish. Well-maintained gear allows you the peace of mind to efficiently “brake” fish after a very well- placed shot. Consciously make it a point to shoot any fish, especially larger ones, where you’ll put a hurt on them; head, shoulder & pectoral fin area. In addition to less chance of the fish tearing out, a well placed shot usually results in them tangling much shallower if shot in the upper water column.

One common technique that works most of the time when the reel line is not too badly tangled is clipping-off the utility float to the gun and putting the reel in free spool before your dive (obviously you do this after the fish is spent). I grab the fish, brain it, and pull the line up through the kelp.

Lyle Davis, an extremely accomplished spearo, likes to dive below the fish and cut all the kelp, thus allowing him to pull the fish, kelp stalk included, to the surface.

Leader Line and Crimps Are Cheap

Don’t be afraid to cut leader or reel line when necessary. I always keep plenty of line and crimps on my boat. My first dive usually results in me assessing and/or “braining” the fish. If I feel good and conditions allow, I unsnap or if quicker cut the leader line and drag the fish to the surface on the first dive. If not, I handle it on the second dive. Although I sometimes accomplish this in one dive, I usually get it done in no more than two dives. Yes, you run the risk of the fish going berserk and swimming away after releasing the line, but it’s safer than repeatedly diving deep, cutting kelp, etc., before having to make that one final dive you might be too exhausted to safely make. I’ve never lost a fish doing this…

Don’t be afraid to shoot a fish with a second gun. This technique worked well for me on a large YT that tangled deep a few years ago. The fish was about 75’, and I was tired from diving all day, multiple dives and fending off two LARGE seven-gill sharks. Fortunately my YT was initially hidden thick in the kelp, and the sharks had problems finding my fish. While not wise, I knew swimming back to the boat and grabbing a tank would most likely result in a meal for the sharks. I powered down to around 60’, quickly cut my original line, and shot the spent fish with my partner’s gun before quickly pulling up everything. The lesson here is to slow down and carefully assess the situation rather than quickly pushing more difficult dives within a shorter period of time.