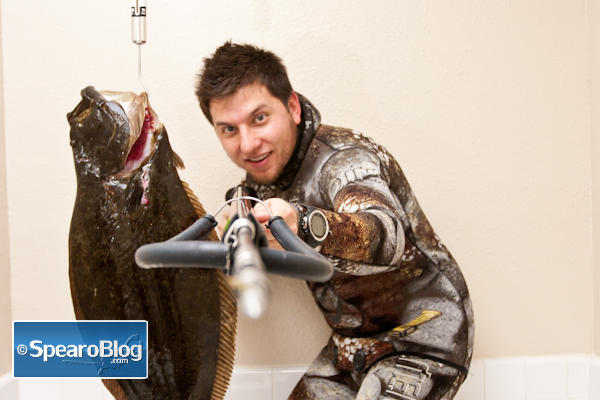 SPEARGUN TESTING – After the Speargun Rebuild last night I took it out after work today. By the time I got in the water the Sun was already setting. I loaded the fat 3/4″ band and started hunting.

HUNTING HALIBUT – I had seen an almost legal hali two days ago while lobster diving. I was in the zone and had

that feeling of inevitability. It was as if something was telling me the fattest fish I’ve ever shot was going to be there on my next dive. That’s probably what a gambler thinks. Covering a lot of ground I was seeing many sting rays. Although I’d heard rumors that when rays are around halis aren’t I continued. Combing the sand and scanning with the dive light I catch a glimpse of a huge tail. It looks too fat to be a hali. It’s dark skin and spots remind me of a Black Sea Bass (BSB) and I think:

“Is that an injured BSB?.. That is a fat hali!..OK..Aim for right behind the gill plate…damn that’s big…get ready for a fight…SHOOT!”


THE SHOT – I shoot and brace myself for the fight. No fight. Did I miss? I take a breath and with knife in hand I swim down and finish what I started. A flood of emotions fills my body. Yes! This is what it’s all about! I’m spiraling head first into the depths of this addiction and I couldn’t be happier. Halibut 12.5 lbs shot with a speargun

CATCH COUNT 2012 – Counting the Lobster from Tuesday this brings my 2012 catch count to four lobsters and one hali.

QUESTIONS – I’d love to hear from you. Leave Comments or questions here or via Twitter. I’m @SpearoBlog.