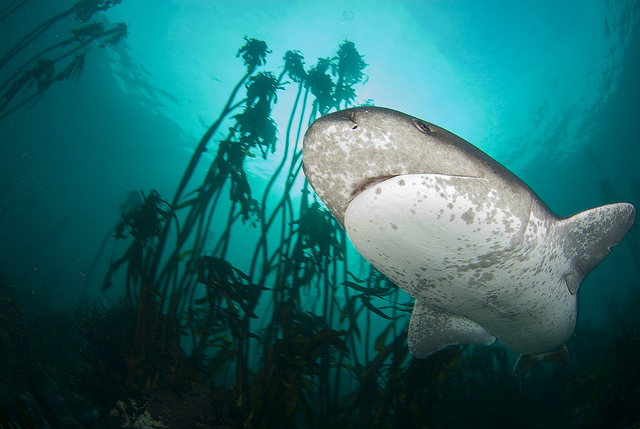 The One That Got Away

BACKSTORY – During my research on spearfishing prior to the Maui trip I got to know a few of the local divers and eventually ended up attending a dive club meeting. This meeting happened to be a gear swap. Members bring items they are not using anymore to sell or trade. One of the items sold that night was my first spear gun. I took it out a few times before the Maui trip without any success. MISTAKEN IDENTITY – After returning from Maui and with my first fish under my belt I continued spearfishing with a new found confidence. My first time back in So Cal waters since Maui. The spearo that sold me the speargun and I agreed to meet after work and go spearfishing. We met at the place for a beach dive and I was pleasantly surprised that he invited a third diver. I was in the middle of the experience range. This was the third divers 2nd time spearing. He was using a pole spear and we both had guns. The three of us headed out past the surf and the visibility was bad. By my calculations the visibility was 5 to 10 feet.
I made my first dive to about 10 feet. I saw a pair of kelp stalks rising from the floor trying to reach the surface. I slowly approached and the silhouette of a Calico bass appeared between the kelp stalks. I lined it up and made my shot. I hit it bellow the spine and in the guts. The more experienced diver proceeded to clean the fish right there in the water to keep the stomach content off the meat. He then attached the fish to his stringer since I forgot to attach mine to my weight belt the night before. I reloaded my gun and we continued hunting. Again I made another dive to 10 feet and swam in mid-water for 10 feet before returning to the surface. When I came up for air I hear the more experienced diver calling me to come join them with a bit of urgency. On my last dive they both spotted the 7 foot Seven Gill shark swim under them and after me. I returned to the duo they tell me they saw a shark.

I try to remain calm but I can feel the adrenalin kick in. We proceed to form a little circle to see if we could spot it and after about 2 minutes we started heading for shore. In a line, the newer diver first, then me, then the more experienced diver. I was swimming towards shore but looking down and trying not to get a cramp. I looked up and could see the diver ahead of me was around 20 feet ahead. When I looked back at the diver behind me about 7 or 8 feet I saw the water erupt with the  thrashing. The shark had gotten a hold of my friend. I poked my head under water and as I did, I saw the shark release my friend and turn to its left and straight in my direction. It’s head swung right then left closing distance I shot my spear between its head and gills at the peak of that left head swing. The shark turned hard left and retreated into the haze. Fearing my friend was badly injured and seeing this as an opportunity to make it to shore, I let go of the gun and swam over to grab him. I started to think I can swim him in if I drop our weights but he was ok. The shark penetrated the wetsuit but surprisingly not the skin. We made it to shore with one less speargun and a hell of an experience.

NOTHING AGAINST SHARKS – I believe the shark was after the fish and with the poor visibility took a nibble at my friends calf by where the stringer with the fish was dangling. Although Seven Gill Sharks are legal to harvest at this location, it is not my target of choice and I would not have shot it if I felt there was another option at the time.