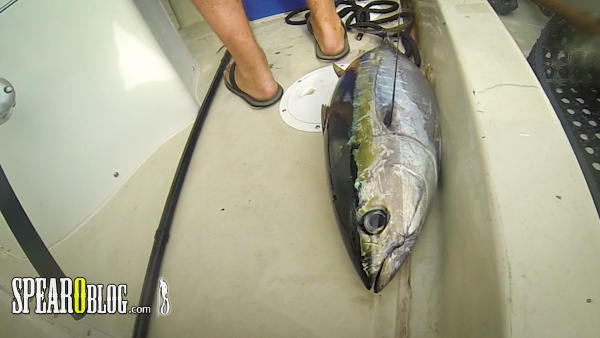 We were back at it last Sunday.

The Yellowfin Tuna were in the reports so we took the rods.

I don’t know much about hook and line fishing. I do a little catch and release bay fishing for sand bass when family’s over.

We met a little earlier than normal this time – [3:45]am. By the time we got to the bait barge the line was about six boats deep on both sides. We got a scoop of sardines and headed out.

Dawn crept up on our way out to sea and before we new it, it was kelp patty spotting time.

We found a medium sized patty and got ready to fish it. Matt put a sardine on the hook then put the line in the water. The sardine darted away. He started to say “OK Lets setup your line…” and bam!! Something starts taking line. The line was probably in the water for 20 seconds before the bite. He reels it in. It’s a nice 25ish pound Yellowfin Tuna. Such a nice fish. We take out the hook and he drops another sardine in. Again, something is taking line. This time it’s a 10-15 lbs Yellowtail. It’s on the boat and another Sardine is in the water. Nothing. He let the little Sardine swim away and no takers. He starts reeling in the line and got hit again. This time it was a Dorado. We were off to a great start. No more bites so I suit up and jump in to see what might still be there.

It was a ghost town. I dove it for 5 min and didn’t see anything. We moved on. Later that day we found a small paddy and could see fish under it as we passed it. We setup a drift and sent in the Sardines to tempt the fish. We did two more drifts before I jumped in. While I loaded the speargun I could see it was a single yellowtail cruising around under the patty. I had two bands loaded when it started to make its way to check me out. I put on the slip tip and tucked the string as the yellowtail swam up to me. It turned about 8 feet from me. I tracked it for a few feet, spit out my snorkel, and blasted it. The shaft went all the way through. It was a good shot near the spine. I pulled the float-line in and put the 14Lbs Yellowtail on the boat. Here’s my boy Aaron watching me filet it at home.

On this trip I used a custom 63″ 4 Band enclosed track speargun made by Arno Chrispeels. Thanks, for letting me borrow that Arno!

The trigger was nice. It tracked well in the water. Although I only shot it once, it hit right where I was aiming. Nice work Arno.

Last Saturday we went out again. Trip report is in the works.