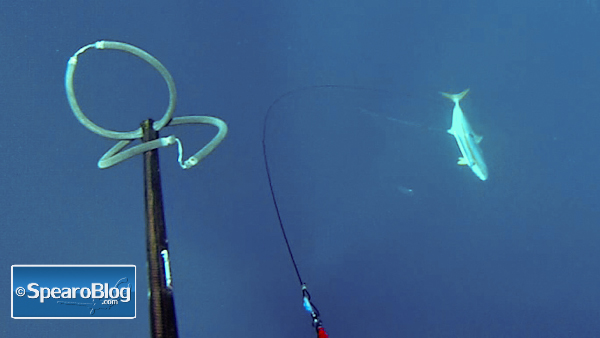 How to use a Float Line

In this application one end of the float line is connected to a float and the other to the end of the shooting line that wraps around the speargun and connects to the spear. In this setup, once the spear is fired into a large fish, the shooting line, float line, and float it will be completely free from the diver and the speargun. The fish is then played or the diver can place a second shot.

This set up is the same as for blue water except the float is replaced with a kelp carrot or sometimes nothing at all. Also, the float line is often 100′ or more. Not having a float at the end allows the diver to swim through the kelp without getting snagged. I’ve seen some guys dive with this configuration and also carry an inflatable float they can clip on the float line after the shot is placed.

I like to keep a float line clipped to my gun even when I’m not expecting to see a large fish. The gun can be left to mark a hole with a fish. After getting another breath the float line can be followed down to your gun. I’ve shot a couple of White Sea Bass with this setup. Shots I would not have taken if I did not have a float line at the time. I clip a float line to my flashlight then. On the other end I’ll clip a float with a dive flag and battery powered light. If I see a large bug I can drop my light and go for it with two hands.