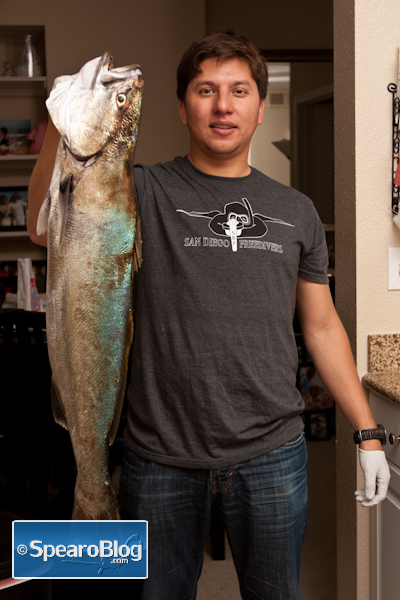 OVER THIS COLD – After battling a cold for a week I was itching to get in the water. A buddy sent me a text last night asking if I wanted to hit the water. I hesitated because I was not sure if I could clear but decided to give it a go.

BIG GUN OR LITTLE GUN? – As we were suiting up I was debating what gun to take.

My short AB Biller or my Aimrite Pro Comp 120. I wanted the Aimrite with the breakaway setup in case I saw a big fish. I also wanted the short gun in case I saw a Halibut. Finally by buddy said just take the little one and a float line. So I did.

IN THE WATER – The visibility was about 10 to 15 feet. The short gun was the right call since shooting a long range gun in low visibility is bad news. My watch was reading a toasty 66 degrees and life was great. After a few dives I saw a school of about 25 Spotfin Croakers. A little later I saw a school of fat zebra perch. There was a good amount of bait in a variety of sizes.


WHITE SEA BASS – I was swimming along the kelp stalks when all of a sudden I see a school of about 10 White Sea Bass heading in my direction. I see there are four leading in a soft “V” and there is one right behind the middle two that look a little bigger than the rest. I take aim and track it for a split second then blast it. I hit it and it bolted. I felt pretty good about the shot since it was so close. I didn’t let it run and started bringing it in right away. As I pulled it in it took off again and was swimming in circles around me. Before I knew it, I had the filament wrapped around me. I quickly bring it in and grab the spear at both ends. I finished it off and took it home.